Design plans for the removal of the “artificially created” Hidden Lake dam, creek restoration and upgrade of the culvert under Innis Arden have now progressed to 60% design.

Work is currently funded in part by:

Right now we are working on: 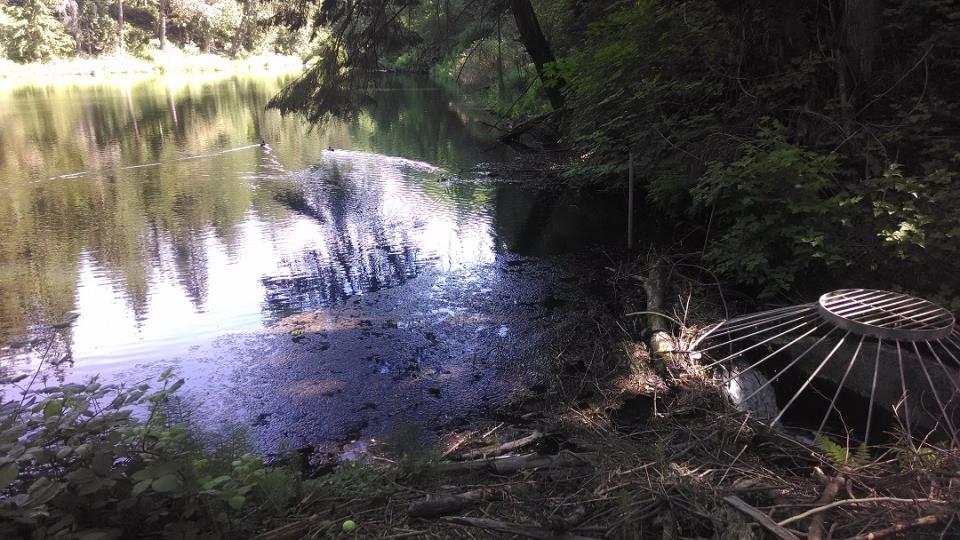 Hidden Lake (From the outlet)

Hidden Lake is a man-made waterbody partially within Shoreview Park. The lake was built in 1920 when Boeing Creek was dammed to create a private fishing pond and small hatchery. At this time the creek's watershed was largely undeveloped. Since then, major development along Aurora Avenue N has greatly increased storm runoff flows to the creek. Increased flows, in turn, have caused erosion issues within the Boeing Creek ravine. Studies have found that ravine side slope soil washed down into the creek by erosion ends up as sediment in Hidden Lake.

Before Shoreline was founded, King County built projects intended to lessen erosion in Boeing Creek. These projects included channel armoring (1974) and the M1 dam (1983) near Shoreline Community College, and the North Boeing Creek Pond in Boeing Creek Park (1990). The original Hidden Lake Dam eventually failed. The former lake was filled with sediment by 1970 and later overgrown with trees. In 1996 King County built a new dam and re-established Hidden Lake.

Sediment entered the new lake much faster than expected. From 2002 to 2013, the City spent over $600,000 to dredge the lake seven times to remove sediment. On September 8, 2014, City Council discussed results of a Hidden Lake Management Plan Feasibility Study. They authorized staff to stop dredging the lake and begin looking into removing the Hidden Lake dam. No sediment has been removed since the summer of 2013.

Hidden Lake is expected to fill naturally with sediment within a few years. Storms play a major role in how much sediment arrives. Once the lake fills itself, the dam cannot be counted upon to safely pass Boeing Creek flows. This scenario would create a dangerous flood risk to NW Innis Arden Way and nearby properties. A program to watch sediment levels in the lake was started in 2016.

On May 23, 2016, City Council discussed the results of an Alternatives Analysis. They supported a proposed plan to remove the dam, replace the NW Innis Arden Way culverts, and restore Boeing Creek within the lake, dam, and culvert area.

The Hidden Lake dam and the NW Innis Arden Way culverts are barriers to fish movement. Native cutthroat trout and (planted) salmon are present in Boeing Creek upstream of Hidden Lake. The plan proposed in 2016 also added a separate but related Boeing Creek Restoration (BCR) project. The new BCR project looked downstream of NW Innis Arden Way to possibly remove other fish barriers, such as the Seattle Golf Club dam. In 2017, analysis indicated that the BCR project fish passage improvements in lower Boeing Creek would not be feasible as a City project.

Removal of the Hidden Lake dam will allow trapped sediment to move downstream. Analysis showed that this freed sediment is expected to improve fish habitat along lower Boeing Creek and at the Puget Sound beach delta. In March 2017, this project was added to the 2017 WRIA 8 Salmon Habitat Project List for Puget Sound Nearshore (as Project Number PS-24).

In August 2017, King County Flood Control District awarded a $300,000 Flood Reduction Grant to the project. This grant will fund design of Hidden Lake dam removal and NW Innis Arden Way culvert replacement. This grant is expected to cover about half of the design costs.

On October 2, 2017, City Council was updated on the project. They supported moving forward with the proposed plan to remove the Hidden Lake dam, replace the NW Innis Arden Way culverts, and restore Boeing Creek in the lake, dam, and culvert area. They also supported not moving forward with a Boeing Creek Restoration project in the lower creek, well downstream of NW Innis Arden Way.

If you would like to communicate with the City of Shoreline or review a document in another language, please send your request along with your contact information to the email address below or call (206) 801-2700.