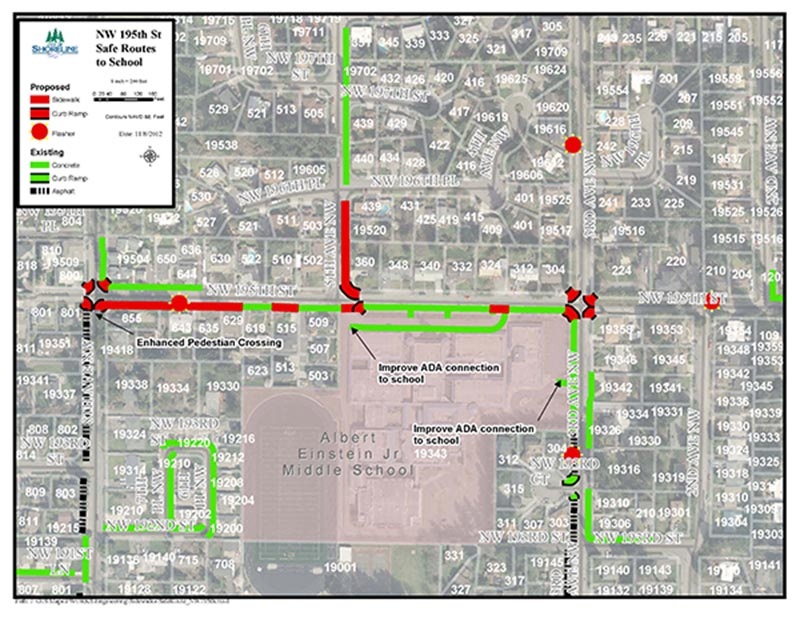 The City of Shoreline was incorporated in 1995 around the community’s pride in the Shoreline School System. Before incorporation, sidewalks were not routinely built or required by King County. Since that time, the City has strived to improve the safety and mobility for users (vehicles, bicyclists and pedestrians) of the transportation system. Much progress has been made; but many important routes remain undeveloped.

The Shoreline community and City Council continue to emphasize the need for sidewalks and improved pedestrian safety. In 2006, the City Council established a 6-year Priority Sidewalk Program focused on sidewalks serving schools. Albert Einstein Jr. Middle School adjacent to NW 195th Street was a priority 1 route in this program; however, there has not been adequate funding to completely construct the improvements. Improvements on 3rd Avenue NW and 8th Avenue NW were installed through this program in 2006. NW 195th Street provides a valuable connection between these two routes and will be completed in this segment of the project.

During development of Shoreline’s Transportation Master Plan (approved 2011), the City Council continued to recognize the importance of sidewalks to the community and emphasized their construction as high priority transportation investments. NW 195th Street was again a high priority for the non-motorized system portion of the plan. This project also enjoys strong neighborhood support, as it was identified in their Neighborhood Transportation Action Plan (approved 2009). This particular route was developed cooperatively with City, Police and School District staff.

In January 2013, the City was awarded $435,000 in Safe Routes to Schools Program state funding from the Washington State Department of Transportation.