The project located at 32nd Avenue NE and NE 147th Street installed two bioretention swales within the public right-of-way along the east side of 32nd Avenue NE at the intersection with NE 147th Street. The north swale is 70’ long; the south swale is 125’ long, with a 33’ culvert to connect the two. The project also replaced approximately 170 linear feet of stormwater pipe and installed two new catch basins. A gravel pathway was installed along the east side of the swales for pedestrian access. All existing trees at this site were spared except for a 24-inch diameter black cottonwood on the south side of the existing driveway through the site, which an arborist determined would not likely survive the project improvements. 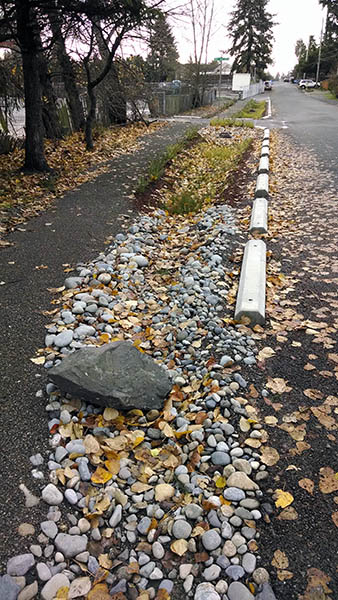 The project located at Stone Avenue N and N 157th Street installed a rain garden within the public right-of-way at the southwest corner of the intersection.