Travel by bicycle is a popular transportation option and recreational activity. The City of Shoreline Bicycle Plan, adopted as part of the 2011 Transportation Master Plan (TMP), outlines priorities, policies, and goals for bicycle transportation throughout the City.

The Bicycle Plan reflects the City’s vision for a complete bicycle system. Illustrating this vision, the 2011 Bicycle System Plan map identifies the location and facility type for existing and future bicycle facilities in Shoreline. Updates to this 2011 plan are expected in 2021 with an updated TMP and will include such facilities as the Trail Along the Rail.

The City of Shoreline Complete Streets ordinance builds on the idea that a street serves many purposes, and in this way supports a strong bicycle network. Per Ordinance 755, the City shall, to the maximum extent practicable:

Initially conceived during the 145th Street Multimodal Corridor Study, the Off-Corridor Bike Network is a collection of quieter, slower-paced streets that are intended to provide bicyclists and pedestrians with alternate, parallel routes to 145th Street as well as key connections to the future Shoreline South/145th light rail station, Interurban Trail, and Burke-Gilman Trail. Improvements to these streets will include bicycle facilities such as pavement markings (e.g. sharrows or bike lanes) and signage.

Currently, the western portion of the Off-Corridor Bike Network between Interstate 5 (I-5) and the Interurban Trail is being designed as part of the 145th Street Corridor Project. The proposed route is generally located on low volume streets where cars go slow enough to allow pedestrians and bicyclists to feel safe and comfortable.

The proposed route will run along portions of 148th Street, Corliss Avenue, 150th Street, Ashworth Avenue, 157th Street, Midvale Avenue, 160th Street, and connect to the Interurban Trail in Shoreline. This portion of the Off-Corridor Bike Network will make connections to and from 145th Street and the future 148th Street Non-Motorized Bridge, which will directly connect pedestrians and bicyclists to the future Shoreline South/145th Station and the Trail Along the Rail. Additional connections will be coordinated to tie-in to Seattle’s bike network.

The City’s goal is to build this western portion of the Off-Corridor Bike Network prior to the opening of the Shoreline South/145th Station in 2024.

The City of Shoreline has been named a Bicycle Friendly CommunitySM by the League of American Bicyclists. 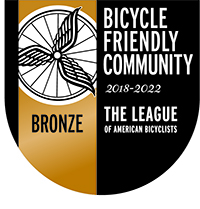