Shoreline's natural beauty, abundant resources and location - within reach of Seattle, yet far enough away to be considered semi-rural - were recognized by the first people to live in the area. Those same characteristics continue to describe Shoreline today.

Early accounts of Shoreline tell how Native Americans traveled along the shores of Puget Sound and local streams collecting swordfern and kinnikinic at Richmond Beach, and wild cranberries at what are now Ronald Bog and Twin Ponds parks. Controlled fires were set in the Richmond Highlands and North City areas to create meadows for the cultivation of certain wild plants and to provide inviting, open spaces for small game.

As railroad fever gripped the Northwest in the 1880s, speculators planned towns in anticipation of the transcontinental railroad route. Among these was Richmond Beach, platted in 1890. The arrival of the Great Northern Railroad in Richmond Beach in 1891 spurred the growth of the small town and increased the pace of development in the wooded uplands.

Construction of the Seattle-Everett Interurban line through Shoreline in 1906, and the paving of the North Trunk Road with bricks in 1913, made travel to and from Shoreline easier, which increased suburban growth. People could live on a large lot, raise much of their own food and still be able to take the Interurban, train or, beginning in 1914, the bus, to work or high school in Seattle. Children could attend one of two local elementary schools, and general stores provided most of the goods that could not be grown at home. Local produce from fruit orchards, chicken farms and strawberry crops could be shipped to the city via the Interurban or the train. The Fish family's Queen City Poultry Ranch on Greenwood at 159th was a prosperous chicken farm which attracted many visitors curious about scientific farming techniques.

During the early twentieth century, Shoreline attracted large developments drawn by its rural yet accessible location. These included the Highlands and Seattle Golf Club (ca. 1908) and the Firland Tuberculosis Sanitarium (ca. 1911) which is now Crista Ministries. Commercial centers formed around the Interurban stops at Ronald (175th and Aurora) and Richmond Highlands (185th and Aurora). Car travel had broadened the settlement pattern considerably by the mid-1920s. Although large tracts of land had been divided into smaller lots in the 1910s in anticipation of future development, houses were still scattered.

The Great Depression and World War II (1930-1945) slowed the pace of housing development. During the Depression, many Shoreline families eked out a living on land they had purchased in better times. By the late 1930s, commercial development concentrated along Aurora which saw steadily increasing use as part of the region's primary north-south travel route - U.S. Highway 99. 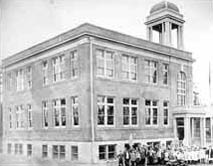 Traffic on 99 swelled, particularly after the closing of the Interurban in 1939. During World War II, building materials were rationed and private housing construction virtually stopped. The only major development in Shoreline during the war was the Naval Hospital (now Fircrest). At its peak in 1945, the hospital housed over 2,000 patients and 600 staff members.

With the end of the war came a tremendous demand for family housing. The late 1940s saw large housing developments such as Ridgecrest (N.E. 165th to 155th, 5th to 10th) spring up seemingly overnight. Schools ran on double shifts as families with young children moved into the new homes. In the late 1940s, business leaders and residents began to see Shoreline as a unified region rather than scattered settlements concentrated at Interurban stops and railroad accesses.

In 1944, the name "Shoreline" was used for the first time to describe the school district. Coined by a student at the Lake City Elementary School, it defined a community which went from city line to county line and from the shore of Puget Sound to the shore of Lake Washington.

Historical photos are courtesy of the Shoreline Historical Museum.