NE 155th Street from 1st Avenue NE to 3rd Avenue NE will be closed to all traffic this weekend.  More info 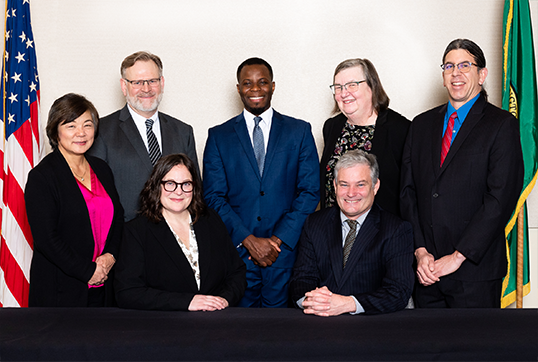 As the City's governing body, Shoreline's seven elected part-time City Councilmembers establish City policies and laws, adopt an annual budget, approve appropriations, contract for services and grant franchises. City Councilmembers serve staggered four-year terms; roughly half the Council is up for election every two years. All Councilmembers are "at-large" meaning that they serve the City as a whole as opposed to a specific district.

The City Council chooses a Mayor and Deputy Mayor from among its members at the first meeting of the new year following an election. The Mayor presides at Council meetings and represents the City at ceremonial functions and inter-governmental meetings. The Deputy Mayor presides in the Mayor's absence.

The City of Shoreline will enter all comments received into the public record and may make these comments, and any attachments or other supporting materials, available unchanged, including any business or personal information (name, email address, phone, etc.) that you provide available for public review. This information may be released on the City’s website. Comments received are part of the public record and subject to disclosure under the Public Records Act, RCW 42.56.

Do not include any information in your comment or supporting materials that you do not wish to be made public, including name and contact information.